Download books Polygamy Talk and the Politics of Feminism: Contestations over Masculinity in a New Muslim Indonesia. (Free)

Abstract The political downfall of the Suharto administration in 1998 marked the end of the "New Order", which was characterized by a 32-year period of authoritarian rule. Opening the way for democracy, it included the unlocking of Indonesian politics for the influence and participation of political Islam, which the New Order discouraged or banned. This shift led to a proliferation of Islamic issues in the public and political sphere. Many of them concerned issues of gender and have triggered profound debates about women's rights and gender equality. This article examines one of these public concerns over "Islam and gender", namely polygamy. It assesses how the issue of polygamy is debated in post-authoritarian Indonesia and scrutinizes the ways in which women's groups, organizations, and different forms of feminism have played an active role in these debates. As my analysis will demonstrate, the contestations between the different women's groups show a far more multifaceted picture of "polygamy talk" which cannot solely be reduced to issues of Islam and gender. Rather, the case study showed that their perspectives intersected with identity politics informed by postcoloniality, modernity, religion, nationality, and globalization. It is through these specters that this article aims to understand the complexity of a transiting Indonesia greatly affected by processes of Islamization and democratization. 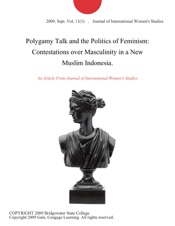